Travel video about destination Egypt.
Egypt is a land of monumental temples, gigantic pyramids, the River Nile and the mysterious Sphinx: 5000 years of history.Founded by Alexander The Great in 332 B.C., the city of Alexandria is located in the Nile Delta and it was here that Caesar and Mark Anthony fell under Cleopatra’s spell. Cairo is Africa’s largest city and the heart of the Arab world, extreme poverty living next to opulent wealth, and modern, Western boutiques next to ancient souks. The Cairo Museum is home to the most extensive collection of Egyptian antiquities, including the golden mask and tomb of Tutankamun. Towering above almost any other human achievement are the impressive three pyramids of Gisa. The Cheops Pyramid, the world’s largest single construction, took four hundred thousand workers twenty years to build. It weighs as much as all the cathedrals in Europe put together and spans an area of 53,000 square metres – the height of a fifty storey skyscraper. In the middle of today’s modern city of Luxor, known as the ‘Capital City Of The Pharaohs’, the Luxor Temple stretches along the eastern banks of the Nile and, not far away, the temple complex of Karnak and the Amun Temple. 67 kilometres from Luxor, on the western bank of the Nile, lies the Temple Of Dendera, the most important place of worship for the love goddess, HATHOR, whose heavenly appearance was portrayed by the body of a cow. At Aswan, the landscape of the Nile is enchanting, but it is the stone temples of Abu Simbel that take one back to ancient Egypt, land of the Pharaohs, and archaeological paradise. 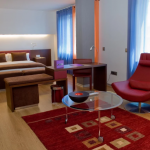 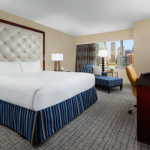 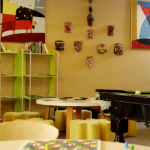